- Great Battery life, the Fitbit Ionic can last for up to 5 days on only one charge. That's seriously good.

- Incredible display with a great UI and responsive touchscreen. Holding up in even the most strenuous of workouts.

- It's very affordable, especially for the amount of tech and apps that come built-in to the Ionic, coming in at $299.95.

- The positioning of the FitBit logo is a little perplexing, perched under the screen, like a billboard. Far too big on a product that you have already bought (you hardly need the brand advertising to you in such a vulgar way at this stage, right?).

- Fitbit Pay doesn't work with half as many banks as both Apple and Android Pay do, leaving you with an underwhelming experience when all is said and done in this department.

- We found the music a little hard to set up, it could have been more intuitive (like the rest of the watch is). This is a minor gripe and once set up correctly it worked great.

Packed to the brim with the latest tech and apps, the FitBit ionic feels like a watermark product for a company that has already done so much in the industry. This is a stylish, sturdy and sleek smartwatch. For the price, coming in a little under $300, the FitBit Ionic is an absolute game changer. it's not perfect, there are a few annoying bit's and pieces, but overall this is one of the best wearables we've seen in years. A stunning workout tracker and overall great smartwatch.

When you’re thinking fitness trackers you’re usually thinking “FitBit”. The two things are synonymous, like bread and butter. And they’ve made some great wearables over the years. Now, in a market that has fast become saturated with lesser quality, knock-off fitness trackers, comes something totally new; the FitBit Ionic. This is the very first FitBit smartwatch on the market, and we’ve got to be honest here, our first impressions are great.

The FitBit Ionic is packed to the brim with cool and useful features. Although users of the Apple Watch will be familiar with some of them, this is a smartwatch that is designed for use primarily in the gym or when you’re out running. Comfort plays a big role in that distinction, this watch feels great on your wrist, it’s incredibly light, which makes the whole experience of working out so much better. Alternatives like the Apple Watch and most of the LG sports series can’t say the same thing, unfortunately.

The watch is waterproof so you never have to worry about frying the components if you push for the burn a little too much and drench the thing in sweat. You can shower with this watch and swimming down to a depth of 50m is no problem. That depth, which has been tested and proved by consumers, is seriously impressive for a smartwatch.

The craftsmanship of this watch is another stand-out feature, it’s seriously well made, and feels like it can stand up to everything the gym has to throw at it. It’s made from aluminum, offering a sleek yet rugged appearance. This is the watch you should wear to the gym, but it doesn’t look like it. It’s pretty enough to stay on your wrist all day long, and in a marketplace packed with pretty smartwatches, this really stands out.

It’s very easy to operate too, with a hardware button on the left of the watch and a further two buttons to the right, which allows you to navigate through the user interface with ease. The buttons are raised so you can find them without having to ever look down, which is great for running or swimming, where you want to keep your focus and attention straight ahead. Not on your wrist. In addition, the FitBit Ionic has a stunning and responsive touchscreen, which you can use to swipe through apps and settings in a breeze.

The watch comes with two strap options; leather and plastic. We preferred the plastic version, it was far more comfortable in the gym than the leather option, which we felt was out of place on this design. It just didn’t feel or look right. Either way, they are both of high quality with sturdy fasteners ensuring that neither will fall off during your next marathon, leaving you lost, looking for the finish line.

The real selling feature of the FitBit Ionic has to be the display. It’s simply stunning. The colors are vibrant and the user interface; sharp and responsive. The form is a little different than that of its competitors, FitBit opting for a rectangular watch face, instead of the more common square face, as seen on the Apple Watch. This is a relatively big screen, which, for the most part, makes great use of the space.

The screen resolution is 384 x 250 and the LCD is especially bright. Everything was clear and easy to see in bright sunshine, which was good to see in a smartwatch, as this is something that many competitors have been guilty of overlooking (LG, we’re looking at you!).

The watch also comes with a great selection of apps and high-tech gadgetry built right into the device. The GPS works great, with two optimally placed antenna bands allowing you to track running routes with ease. The built-in heart rate monitor functioned brilliantly, doing away with the need for those annoying chest band sensors (good riddance!).

An especially cool new feature in this watch is the automated pause option, which kicks in whenever it detects a lull in your training. For example; waiting to cross the road or tying your shoelace. When you’re finished your workout will start back up again, all done without any input from you. We found this feature to be really nifty.

The FitBit comes with a personal trainer on your wrist to coach you through the numerous workout apps that come included with the watch. There are some great apps here and they all come included, there aren’t any subscription fees or anything like that, you have access to it all right out of the box. 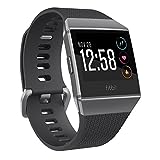 Some recommended products may use affiliate links. TheWorkoutNut.com is a participant in the Amazon Services LLC Associates Program, an affiliate advertising program designed to provide a means for sites to earn advertising fees by advertising and linking to Amazon.com. Amazon and the Amazon logo are trademarks of Amazon.com, Inc or its affiliates.